Bungie had its 2nd of the 3 Twitch streams related to the upcoming April Update. In the 1st stream, Bungie took us on a tour of the some of the upcoming content in the April Update. Today’s stream covered “New Things to Earn”. And DeeJ did not disappoint.

The opening 30 seconds of the stream was a torrent of clips and pictures of what’s coming in the April Update. After the opening montage, DeeJ appeared on screen with two other Bungie employees - Keith Bachman and Brenton Woodrow. They discussed their contributions to the April update and what they did to Takenize the new Destiny content. Bungie again made a point to stress that the April Update will give players “16 weeks of new content” to play. 1 The walk through began with a trip back to the Reef.

The new content reveal was kicked off with a little bit of a fashion show. Each faction is getting a full set of new armor for each character class. The height of the fashion show was when DeeJ revealed two new armor types.

Spektar This is a new line of armor and is style of armor we saw on the Titan in the pre-release images from Bungie. The armor has smoother, more modern lines and is accentuated by the glowing outlines Bungie called chroma. There’s more detail on the new chroma feature below. 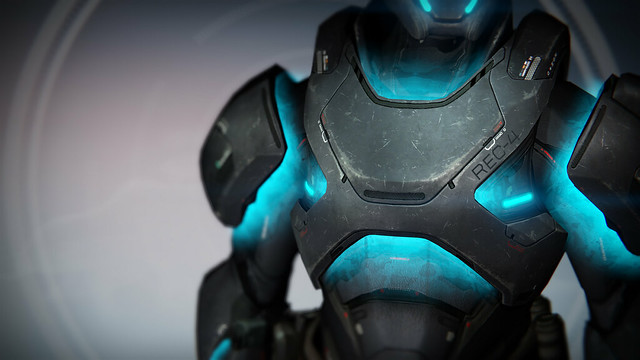 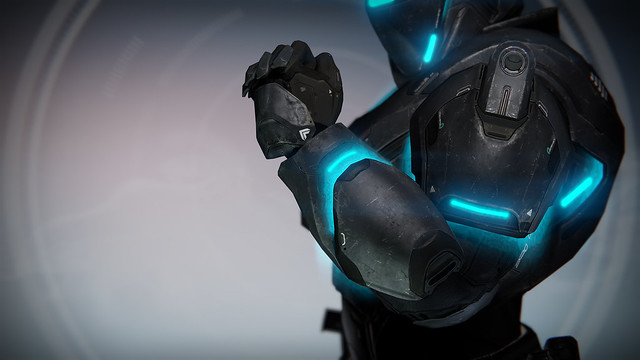 Desolute This is the new line of armor that makes your Guardian look like they were Takenized. This is not a shader as a lot of us speculated. To gain the full Taken effect your character will have to have a full set of Desolute armor. Having a full set of Desolute armor will also unlock a new emote - Jitter - which makes your Guardian move more like its a Taken enemy. 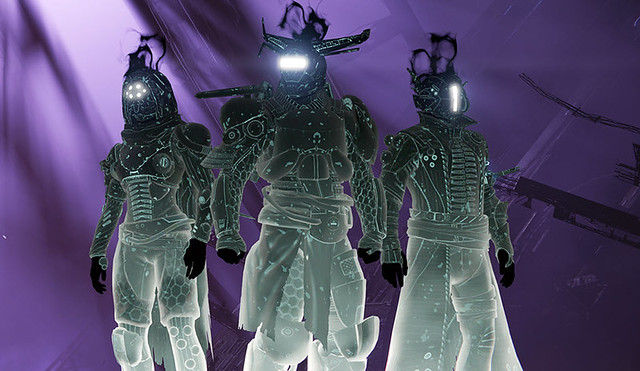 Side note: I can just imagine having a fire team running a King’s Fall Raid in Desolute armor.

In the previous Twitch stream we saw some red buttons on one of the weapons the Bungie fire team won in the Challenge of the Elders. This week DeeJ and crew explained what these are and how they work in the stream. New weapons and armor that drop as part of the April Update will include a new chroma perk tree. Think of it as the glowing lights on objects in Tron. 2 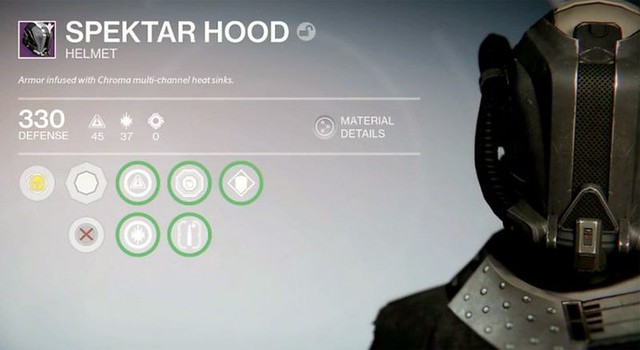 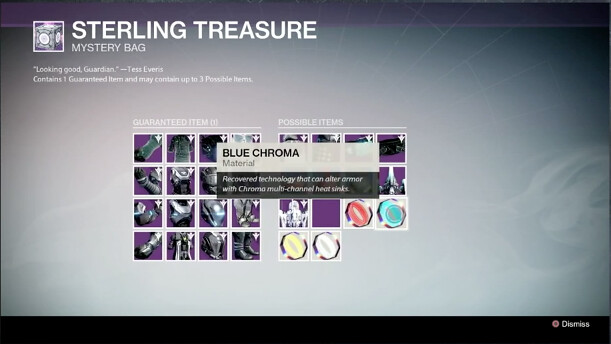 New items with this feature will drop with one of four chroma colors.

To enable the chroma you use a consumable chroma material and it will essentially light up the armor piece. 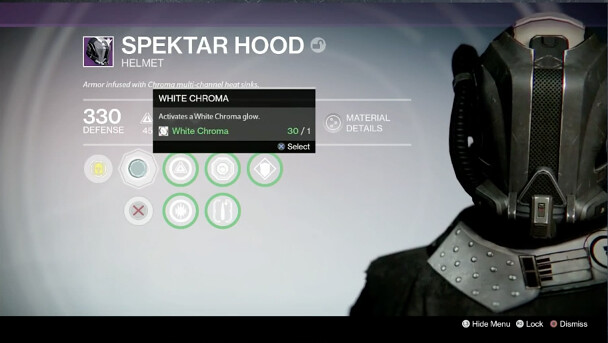 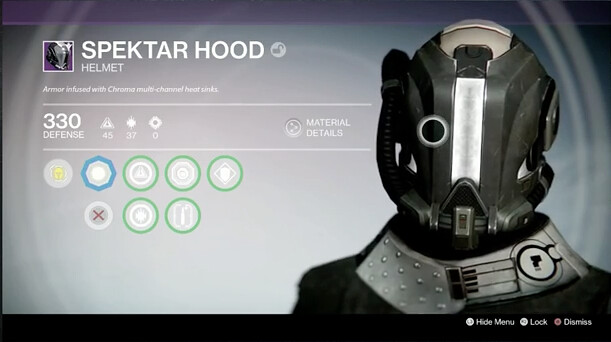 You can change the color of item by re-rolling the chroma perk for 100 glimmer. The new color selection is completely random so you may need to re-roll it a couple of times to get your choice of color. If the item previous had the chroma feature enabled, re-rolling a chroma color will also discard the previous chroma material. 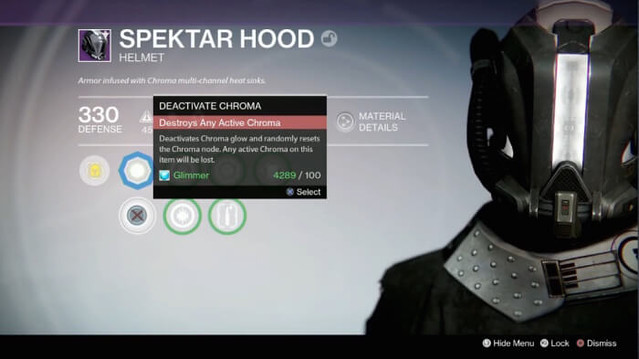 The chroma effect will work similarly for weapons included in the April Update. 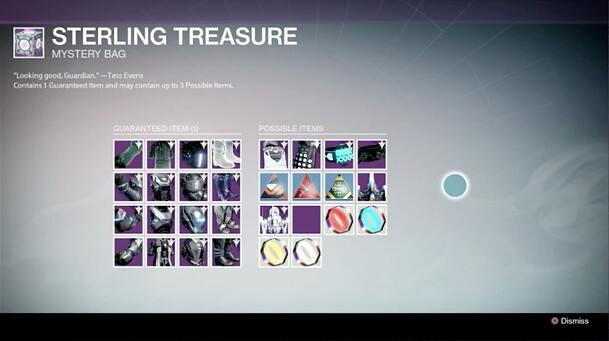 One item that is an optional drop from a Sterling Treasure box is a reputation booster pack. These packs will allow you to more rapidly boost your Vanguard, Crucible or House Judgement rank for you and your team for 2 hours.

Bungie briefly went over some Y1 weapons that coming forward. A Destiny Reddit thread has a breakdown of what weapons are getting pulled into Y2:

Images of some of the updated weapons coming in April: 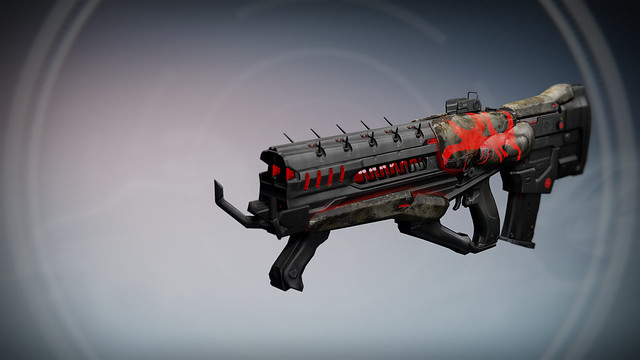 Note the colored sigil markings on the weapons are part of the chroma package for the weapon. 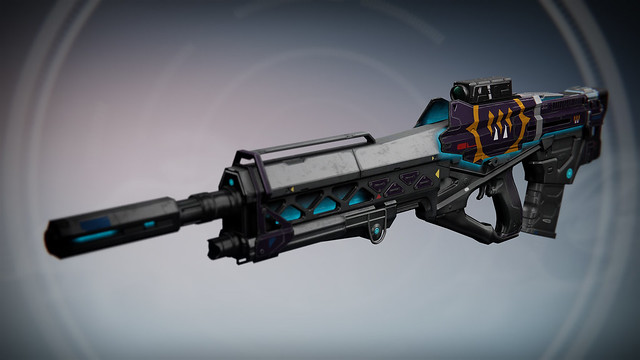 Side comments made in the stream make it sound like Taken weapons will only drop from the new Winter’s Run strike. 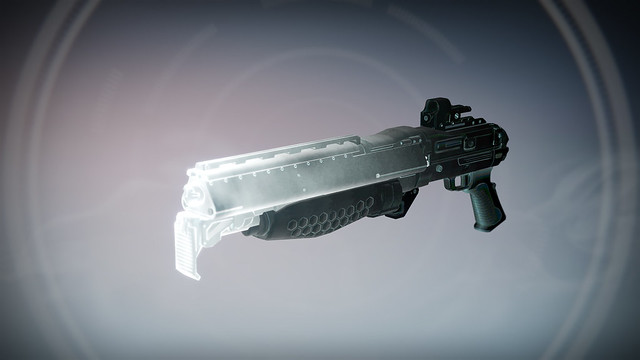 A new Taken sword was also shown off and details on how to get the sword were not strictly laid out in the stream.

One part of the April Update that Bungie didn’t show on the stream was the Y1 exotics that are coming to Y2. The current list revealed by Bungie includes:

Out of all the Y1 → Y2 releases, Patience and Time and Universal Remote appear to be the most interesting. Patience and Time is a sniper rifle that grants ~10 seconds of invisibility to the Guardian when crouched and looking down the sights. Universal Remote looks promising due to the increased range and precision when looking down sights. Both of these weapons could disrupt the current gameplay in the Crucible and Trials of Osiris.

There was also a sigh of relief (and disappointment) that it appears we won’t see Thorn or Gjallarhorn get Y2 updates.

After all the other goodies that DeeJ and the gang showed us, they let us know there are few other new goodies to work towards:

Where to get new gear

So now that we know about all the new stuff coming on April 12, where can you get it? Here are the player activities that Guardians can do to get some of the new goodies.

Bungie heard our cries and they have added an additional page of vault space for all items - Weapons, Armor, and General. This will be updated after you download and apply the patch to your console.

Bungie has one final Twitch stream before the April Update drops. Next week Bungie will cover

The next stream will be Wednesday, April 6th at 11am PT.

See you next week Guardians!